The ClonePix System images cells grown into discrete colonies (either suspended, or grown adherently under semi-solid media) using fluorescence specific to the protein of interest (via conjugated antibody to that protein or to peptide tags at the termini of the expressed protein). These images are then analyzed to select the highest producing clones of the protein of interest. The ClonePix System has five fluorescent channels, plus white light for colony detection. Up to three fluorescent channels can be multiplexed together thus allowing multiple probes to be used in a single picking run.

The ClonePix System removes the need for serial dilution or cell sorting techniques. Monoclonal populations of high-secreting cells are established in a much shorter timeframe, removing many of the bottlenecks associated with producer cell-line optimization and downstream scale-up for protein production.

The ClonePix System images and selects clonal colonies of cells secreting an endogenous or stably transfected protein, or recombinant protein of interest. For full-length, un-tagged peptides, the detection of secretion requires a fluorescently conjugated antibody to that protein (Figure 1). Due to the nature of ClonePix technology, it is important that a polyclonal, or several monoclonal antibodies raised against different epitopes to the same protein, is used as opposed to a single monoclonal antibody.

The ability of ClonePix Systems to image colonies using multiple wavelengths allows several fluorophores to be multiplexed in a single picking process. As a result, secretion of more than one protein from a colony can be evaluated, or protein production multiplexed with cell viability stains. Colonies of cells can then be automatically analyzed, with the highest producer clones automatically picked into a 96-well destination plate. 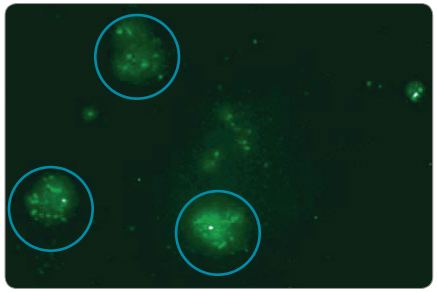 Where it is not possible to detect the protein of interest directly (e.g. lack of available specific antibody), tagged recombinant proteins can be detected indirectly by probing with fluorescently conjugated antibody against the tags. For example, as shown in Figure 2, constructs encoding the protein of interest with the His6- and FLAG- tag sequences at the C-terminus of the protein can be transfected into the preferred cell line (e.g. CHO, HEK, NS0, etc.) and detected using a mix of anti-His and anti-FLAG antibodies—at least one of which should be fluorescently conjugated. If the tag is large enough (e.g. 2x Flag or a human Fc tag) then a single detection probe should be sufficient. 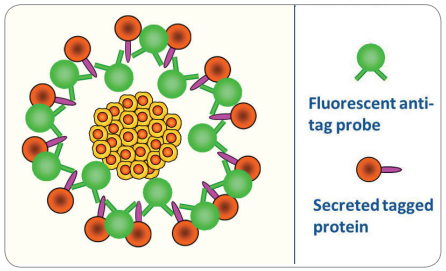 Figure 3. White light and fluorescent images of adherent CHO colonies. White light (A) and fluorescent image (B) of adherent CHO colonies. The CHO cells were stably transfected with a monomeric protein construct containing both His6 and FLAG epitopes at the C’ terminus. They were grown as suspension in CloneMatrix-based semi-solid media. Imaged with antibodies to His6 and FLAG, of which the anti-His6 antibody was conjugated to FITC to allow fluorescent visualization of the secreted protein.

This enables protein secretion to be analyzed in exactly the same way as for un-tagged proteins (above) or for IgG secretion experiments and subsequent high producer colonies to be picked and grown, post-picking, into monoclonal high-secreting populations.

Following transfection of the cell line with the construct encoding the protein of interest (tagged with two epitope tags, if necessary) cells should be grown under selection using standard methods and plated into semi-solid media using CloneMatrix (K8500) and 2x concentrate of the media of choice at a density of between 200 (CHO)–1000 (HEK293) cells per mL of semi-solid media. Both serum-containing and chemically defined expression media can be used.

Polyclonal antibody to the protein of interest (fluorescently conjugated), or two antibodies to the epitope tags used, are added to the media either at the time of plating, or sprayed on using an atomiser, at least 24 hours before imaging and picking the colonies. In either case the final (total) antibody concentration should be between 7-10 μg/mL—it may be possible to titrate particular antibodies to lower concentrations, or indeed increase antibody concentration to improve image intensity, but these concentrations have proven optimal for the above data. When using epitope tags the molar quantities of both antibodies should be at a 1:1 ratio and at least one, if not both, of these should be conjugated to the fluorophore of choice.

Following growth into colonies of about 100 cells suspended in, or adhered under, semi-solid media (this is typically after 7-12 days) plates can be fluorescently imaged using ClonePix. The system software will then automatically analyze fluorescent intensity (and therefore productivity) and pick the highest secreting colonies into separate wells of a 96-well destination plate containing the expression media of choice for out-growth and scale up. The cell lines picked are now clonal high producer cell lines.

The technology in ClonePix Systems removes the need for serial dilution or cell-sorting techniques. It allows monoclonal populations of high-secreting cells to be established in a much shorter time frame, removing many of the bottlenecks associated with producer cell-line optimization and downstream scale-up for protein production. The low labour requirement means that more cell populations can be interrogated in parallel, increasing cell-line throughput. It is estimated that one ClonePix System used by two scientists is sufficient to take more than 100 cell populations from transfection to the shake-flask stage per year.