Our unique ClonePix 2 System technology utilizes our ability to grow mammalian cells into clonal colonies suspended in semisolid media and to image these colonies using fluorescent assays and markers. Here, we describe a novel application for this technology in the isolation of clonal cell populations based on their expression of cell surface proteins.

The ability to select cells based on surface protein expression is of great use in establishing cell lines expressing the receptor(s) of interest for downstream phenotyping/genotyping, basic discovery research, or as a cell line for cell based assays and screening. Historically, such separation of cells has been achieved using Fluorescence Activated Flow Cytometry (FACS) to sort cell-based protein expression. Using our fluorescence imaging technology, we have provided a high-powered alternative to flow cytometry that enables users to select the highest expressers for a particular receptor or combination of receptors/cell surface proteins, which results in monoclonal populations of cells as opposed to the enriched top 5% that FACS produces that are not clonal and require further serial dilution to establish monoclonality.

We have optimized our semi-solid media to allow growth of a variety of cells into suspended clonal colonies of 50-100 cells in less than 14 days. This has enabled us to select cells from a mixed or heterogeneous population for their expression of endogenous cell surface proteins, using fluorescently conjugated antibody to the protein of interest (Figure 1). 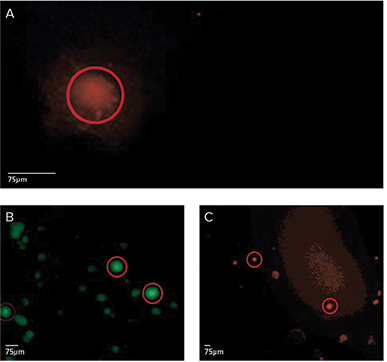 This technology has also been extended to the selection of cell lines transfected with a receptor of interest. With the aid of an antibody to this receptor, the ClonePix 2 System technology allows the highest expressing colonies from a population of transient or stable transfectants to be selected based on fluorescent intensity, and therefore, receptor expression levels. This is of great importance in generating reporter cell lines for screening (Figure 2).

Figure 2. CHO K-1 cell colony detection and selection. Detection and selection of colonies of CHO K-1 cells that have been stably transfected with a construct encoding the human G protein-coupled purinergic receptor P2Y1. Cells were grown in semi-solid media with FMAT-Blue (Applied Biosystems) labeled polyclonal antibody to the purinergic receptor hP2Y1 added at day 8 and the cells imaged and picked on day 9. Images show pre- (A) and post- (B) picking colorized images from ClonePix System (Cy5 filter set, 4s) clearly showing the removal of the brightest colonies from the media. C) High resolution image of a single colony showing close association of P2Y1 dependant fluorescence with cells within the colony.

During target discovery research for novel receptors and drug targets, it may not be possible to generate or acquire antibody to the novel receptor of interest. To this end, we have validated our technology for picking colonies of cells expressing transfected receptors with extracellular epitope tags encoded in their constructs. Expression is quantified using fluorescently conjugated antibody to that epitope tag for detection. An example of such an experiment using FLAG tagged transfected receptor is shown in Figure 3.

Figure 3. FLAG-tagged cell colony detection and selection. Detection and selection of colonies of CHO K-1 cells that have been stably transfected with a FLAG-tagged human drug target receptor. Cells were grown in semi-solid media with FITC labelled anti-FLAG monoclonal antibody added at day 8 and the cells imaged and picked on day 10. Images show pre- (A) and post- (B) picking colorized images from ClonePix FL (FITC filter set, 5s) clearly showing the removal of the colonies from the medium.

In each of the above examples of this application, single cells were plated at a density of between 300-1000 cells per mL (depending on the cell line) in CloneMatrix (Molecular Devices, Cat #K8510) based semi-solid media (using the appropriate liquid media base for each cell line under investigation). 2 mL of this cell suspension were plated into each well of a black-walled PetriWell-6 plate (Molecular Devices, Cat #W1150) and the cells returned to 37°C and allowed to grow into colonies of between 50-100 cells per colony (7-14 days, depending on the cell line). When the colonies reached this optimal size, the corresponding fluorescent antibody to the receptor of interest was sprayed onto the semi-solid media using our atomizer bottles to achieve an even covering of antibody solution over the well. The plates were incubated for a further 24- 48 hours to allow the antibody to diffuse through the media and bind to the colonies expressing the receptor(s) of interest.

Fluorescent colonies were imaged using ClonePix 2 System with excitation/ emission filter sets for the fluorophor being used. These images were then analyzed using the system’s dedicated software, the colonies picked (using the system’s standard picking procedures) from the semi-solid media and dispensed into the wells of a 96-well destination plate (containing 200 µL of the appropriate growth media), in order of fluorescence (i.e. most fluorescent colony in well A1).

Picked clonal populations of cells were then analyzed post-pick to confirm good growth and viability after the picking process.

The growth and fluorescent screening of distinct clonal colonies in semi-solid media allows the ClonePix 2 System technology to greatly reduce time and labor costs by improving clonal cell lines selection efficiency based on surface protein expression. Our novel method of growing colonies of cells, before automated analysis and picking results in much higher viability of ‘sorted’ cells allowing us to identify colonies of interest from over 3000 clones. This application of our established technology will greatly improve the quality and efficiency of cell-line development.

To support this application, Molecular Devices has developed an extensive panel of fluorescently labeled antibodies to a range of human cell surface proteins, all of which come with our unique atomizer bottles for easy and simple application to our semi-solid media.