Difficult-to-kill bacteria have become a problem in hospital-acquired infections. Identifying compounds which kill these bacteria is of interest to many pharmaceutical companies. Developing and optimizing assays to screen for the efficacy of these compounds is a challenge faced by many microbiologists.

Here, we describe the setup of a bacterial growth assay using SoftMax® Pro 7.0 (or higher) Data Acquisition and Analysis Software. Both cell density and GFP signals were recorded over a time course using the Workflow Editor acquisition function. Various data transformation steps in the software are discussed, such as normalizing the GFP signal to cell density, as well as extracting growth rates or other kinetic relevant information.

Bacterial growth data were captured using the SpectraMax® i3x Multi-Mode Microplate Reader at the Department of Preventive Dentistry at the Academic Centre for Dentistry (ACTA) in the Netherlands. Here, Enterococcus faecalis strain OG1RF containing plasmid pMV158-GFP was used at various growth conditions. GFP (green fluorescent protein) expression is heterologous, and the strain is described in the publication of Hoogenkamp et al1, where GFP was studied as a viability marker for the difficult-to-stain species E. faecalis. 150 μl of E. faecalis in PBS, and PBS as background control, were pipetted into a 96-well black-walled μclear plate. To prevent evaporation, the microplate was covered with a qPCR seal. The microplate was then placed in a SpectraMax i3x reader and incubated at 37°C for the duration of the kinetic measurement.

Using the SoftMax Pro Workflow Editor, a kinetic cycle containing an absorbance read (PlateOD600) and a fluorescence read (PlateGFPBottom) with a 5-second linear plate shake between reads was created (Figure 1). Absorbance was measured at 600 nm (OD600) to determine the bacterial growth. GFP expression, an indicator of viability, was monitored using bottom-read fluorescence detection with excitation at 485 nm (bandwidth 9 nm) and emission at 515 nm (bandwidth 15 nm). Both data traces (absorbance and fluorescence) were recorded in two independent plate sections. The kinetic cycle was set to repeat once every 15 minutes for a total of 18 hours. Optional software features allow the user to pause and resume a kinetic read, enabling the addition of reagents during the run (not used in this experiment). The resulting dual read mode kinetic data were analyzed using SoftMax Pro Software.

Figure 1. SoftMax Pro 7 Workflow Editor for a dual read mode kinetic reading. The drag and drop feature is easy to configure and enables a customized workflow to be set up quickly.

As an initial step of data analysis, the user must decide whether or not to define a blank. The blank well location was set using the template editor, which offers the choice of a group blank or plate blank. A plate blank is subtracted from the raw data of all sample wells in the plate at each timepoint, whereas a group blank is subtracted from associated sample wells only. In this experimental setup, buffer background traces were captured as a control for possible contamination with bacteria or other species. The buffer was not interfering with either the OD600 or the GFP measurement, therefore no subtraction was required. If media or buffer components interfere with the OD600 or fluoresce, a subtraction of the blank is recommended to retrieve the true signal values for either the absorbance or fluorescence channel. Also, this allows comparability of measurements. 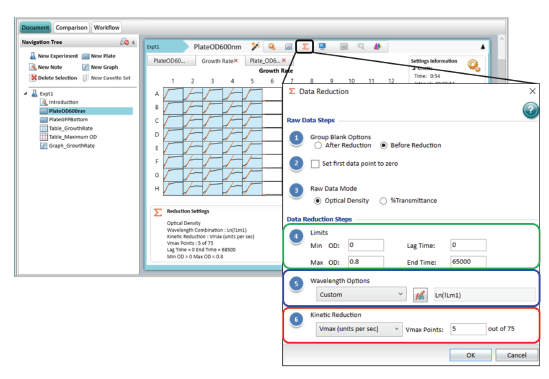 Figure 2. Data analysis options in the Reduction Settings menu. This example shows the logarithmic transformation of the optical density data in plate section ‘PlateOD600nm’ and the subsequent reduction to the Vmax rate value with 5 Vmax points to retrieve the steepest part of the curve.

Raw data steps include the option to set the first data point for all kinetic traces to zero. Furthermore, a blank calculation can be included before or after the kinetic reduction. When ‘before reduction’ is selected, the averaged blank well(s) kinetic data trace is subtracted at each timepoint from all raw data sets individually. Choosing ‘after reduction’ subtracts the average of the reduced blank well data, such as Vmax rate, from the sample well data. 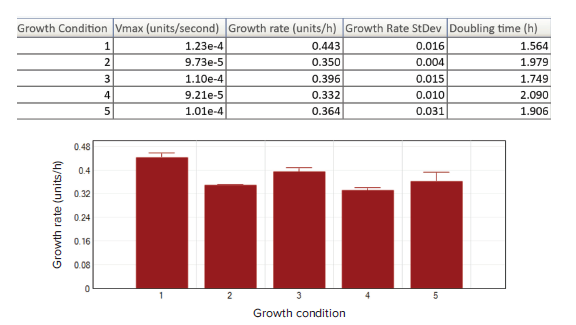 Figure 5. Results display options. The reduced data display of the plate section and results of each experimental condition of E. faecalis (Column 1 to 5, n=8) are summarized in the results table as wells as a bar graph. Vmax rate was used to retrieve both the growth rate (k=Vmax*3600) and doubling time (g=ln2/k).

The Workflow Editor in SoftMax Pro 7 Software, together with Molecular Devices multi-mode microplate readers including the SpectraMax i3x reader, offers the flexibility to record dual read mode kinetic growth data with optical density and fluorescence protein expression at the same time. Analysis is built into SoftMax Pro Software and offers a variety of data analysis options and transformation for bacterial growth data, such as data normalization or logarithmic scaling adjustment. A variety of kinetic data reduction parameters, including Vmax rate or Onset time, are preconfigured in the software. The desired data output parameters can be easily consolidated in table or plate format and graphed as bar graphs or scatter plots to support the evaluation of various experimental conditions.