Two-dimensional (2D) cell culture has been used for over a century to investigate a wide range of cellular processes. However, more recent studies have shown that responses in 2D systems can differ significantly from those seen in vivo (Duval et al., 2017). A variety of methods for transforming 2D cultures into 3D spheroids have been devised, but many of these require a long time to form spheroids that can be difficult to handle.

The 384-Well Bioprinting Kit from Greiner Bio-One offers an easier way to quickly form spheroids that can be kept in culture for up to three weeks. Cells growing in 2D culture are first treated with NanoShuttle™-PL, a nanoparticle assembly consisting of gold, iron oxide, and poly-L-lysine, to magnetize them. They are then trypsinized and transferred to a cell-repellent 384-well plate, which is placed atop a spheroid drive consisting of 384 magnets positioned below the wells of the plate that cause the magnetized cells to aggregate at the well bottom in the shape of the magnet over the course of 15 minutes to several hours. Afterwards, the plate is kept in an incubator, and the spheroids can be treated under a variety of experimental conditions.

HepG2 human hepatocellular carcinoma cells were cultured in Eagle’s Minimum Essential Medium (EMEM) supplemented with 10% fetal bovine serum (FBS) and 1% penicillin/streptomycin. In preparation for spheroid formation, cells were cultured to 80% confluence in a T-25 culture flask. They were then treated with NanoShuttle-PL as follows:

The next day, the magnetic spheroid drive was wiped down with 70% ethanol and placed in a biosafety cabinet to keep it sterile. HepG2 cells that had been incubated in NanoShuttle-PL overnight were trypsinized, then counted and resuspended to 20,000 cells per mL of culture medium, a density that would yield 1000 cells per well when seeded at a volume of 50 μL per well. A cell-repellent 384-well plate was placed on top of the 384-well spheroid drive. The cell suspension was seeded into the plate at 50 μL per well, and the cell plate was placed atop the magnetic drive for 15 to 30 minutes so that cells aggregated (printed) at the bottom of each well in the shape of the magnet.

Table 1. Settings used to acquire images of spheroids on the MiniMax cytometer. Settings are shown for transmitted light (TL) images collected of spheroids on days 2 and 5 after printing. Fluorescence settings shown were used to image compound-treated spheroids assayed with the EarlyTox Caspase-3/7-D NucView 488 Assay Kit.

The EarlyTox Caspase-3/7-D NucView 488 Assay Kit was used to determine the level of apoptotic activity in each spheroid after four days of compound treatment. The 1 mM stock of NucView 488 Caspase-3 Substrate in DMSO was diluted to 7.5 μM in culture medium and added to the spheroids. Cells were incubated at room temperature for 15-30 minutes, protected from light.

Imaging was performed on a SpectraMax MiniMax 300 Imaging Cytometer using the 541 nm green fluorescence channel (settings are shown in Table 1). Images were collected and analyzed using SoftMax Pro Software. To analyze the spheroids, the Set Size and Intensity setting was used, with minimum width set to 200 μm and maximum width set to 1000 μm. Intensity Above Background was set to 200. These settings ensured that only spheroids, and not other cells or debris, were analyzed by the software.

Printed HepG2 spheroids formed rounded, compact structures that could be maintained in culture for several days, offering flexibility in the scheduling of compound treatment. Images taken of spheroids 48 hours or 5 days after printing show the progression of the cellular arrangement (Figure 1).

Figure 1. Spheroids imaged in the TL channel of the MiniMax cytometer. Images of the same well were taken 48 hours or five days after spheroid bioprinting.

Treatment of spheroids with anisomycin or doxorubicin induced apoptosis in a concentration-dependent manner. The EarlyTox Caspase-3/7-D NucView 488 Assay Kit was used to fluorescently stain the nuclei of apoptotic cells green, which was easily detected on the MiniMax cytometer (Figure 2). Spheroids were analyzed for total fluorescence intensity, indicating the amount of total apoptotic activity (Figure 3). 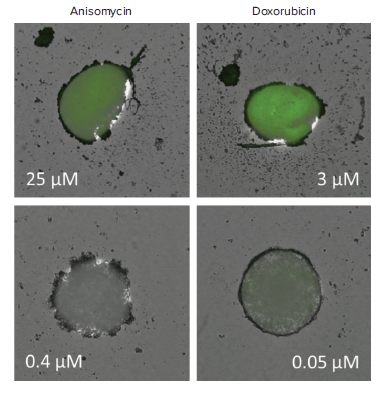 Figure 2. Overlaid TL and fluorescence images. Spheroids were treated with high (top row) or low (bottom row) concentrations of anisomycin or doxorubicin and assayed with the EarlyTox Caspase-3/7-D NucView 488 Assay Kit. Images taken in the TL and green fluorescent channels were overlaid. 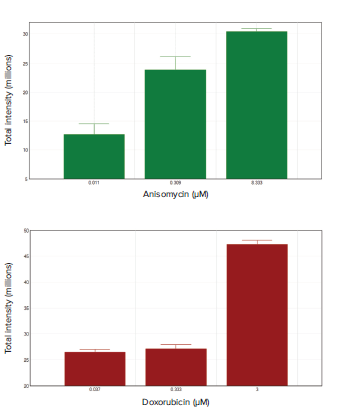 Figure 3. Analysis of apoptosis in anisomycin- and doxorubicin-treated spheroids. After assaying with the EarlyTox Caspase-3/7-D NucView 488 Assay Kit and imaging on the MiniMax cytometer, total fluorescence intensity of spheroids was plotted vs. compound concentration in SoftMax Pro Software. Low, intermediate, and high concentrations of compound are represented here.

Spheroid bioprinting is a rapid way to aggregate cells into three-dimensional structures that offer better biorelevancy than cells cultured in monolayers. HepG2 cells grown in a monolayer culture were magnetized and bioprinted using the m3D system, and the resulting spheroids were assayed for apoptosis using the EarlyTox Caspase-3/7-D NucView 488 Assay Kit. The SpectraMax i3x reader with MiniMax cytometer enabled efficient imaging of spheroids in one site per well, as well as quantitative analysis of apoptosis with SoftMax Pro Software.