Cardiac hypertrophy is a condition associated with many heart diseases such as myocardial infarction, ischemia, hypertension, valvular dysfunctions, and is also observed as a toxic side effect of environmental contaminants or pharmaceutical drug candidates. It is characterized by different cellular changes including increased cell size and enhanced protein synthesis. One of the classic biomarkers for hypertrophy is B-type natriuretic peptide (BNP), which is over produced in hypertrophic cardiac cells1.

Monitoring induced pluripotent stem cell (iPSC)-derived cardiomyocytes with highcontent imaging assays enables highthroughput measurement of the onset or amelioration of hypertrophy as a result of compound toxicity or as a screening endpoint, respectively. Thus, these assays are a robust and useful tool for phenotypic screening processes used in both pharmacological testing and for drug development through disease modeling2.

In the following experiments, iCell® Cardiomyocytes (Cellular Dynamics Intl., Madison, WI), derived from human iPSCs, were used in an in vitro assay to illustrate detection of hypertrophy via increases in cell size and elevated levels of BNP. These cells have been shown to recapitulate the biochemical, electrophysiological, mechanical, and pathophysiological properties of native cardiomyocytes, and a disease model for hypertrophy was created by inducing cells with endothelin-1 (ET-1). The effectiveness of compounds for reducing hypertrophy was quantified using the automated ImageXpress® Micro High-Content Screening System and MetaXpress® Software to measure BNP expression and cell area2

A detailed protocol1 for assaying cardiac hypertrophy can be obtained from Cellular Dynamics International. The general workflow, which is easily amenable to highcontent screening, is shown in Figure 1. Total reaction volumes were typically 40 μL in 384-well plates. 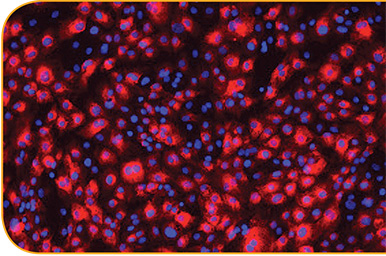 Figure 1. Assay workflow for screening with high-content imaging and analysis.

Data acquisition was performed on the ImageXpress Micro System. Images were collected at 10x or 20x magnification at two different wavelengths (using DAPI and Cy5 filters) with adaptive acquisition to automatically collect enough sites to examine ≥1000 cells per well in a 384-well plate. Data analysis was performed with MetaXpress Software using the Multi-Wavelength Cell Scoring Module.

Increased levels of BNP is one of many proteins whose expression is altered during cardiac hypertrophy. Here, the expression of BNP was determined using high-content imaging by labeling BNP with a fluorescent antibody to measure cytoplasmic BNP staining (Figure 2A). In this experiment, iCell Cardiomyocytes were treated with a 10-point dilution series of ET- 1. A dose response curve was generated for the ET-1 induced expression of BNP in cardiomyocytes by plotting the BNP signal per cell against the log concentration of compound treatment (Figure 2B). The curve was then fit to generate an EC50 value from the ET-1 dose-response. 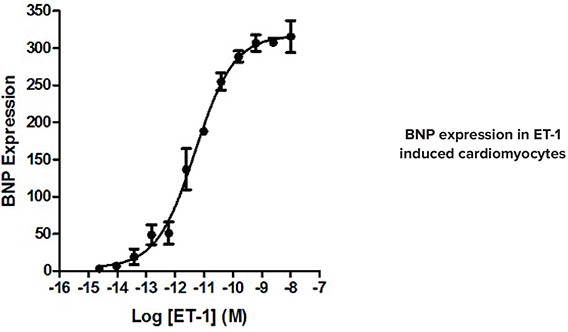 Figure 2B. In this representative 384-well experiment, a dose-dependent increase in BNP expression occurred after stimulation with the indicated concentrations of ET-1. The EC50 value for ET-1 was 24 pM (mean ± SEM; n = 4 for each point on the curve)1.

Increased cell size and structural reorganization of the actin cytoskeleton are well-accepted cellular features of the hypertrophic response2. To illustrate how hypertrophy can be determined by monitoring increases in cell size, iCell Cardiomyocytes were induced with ET-1, stained and then imaged on the ImageXpress Micro System. Hypertrophic cardiomyocytes were visibly larger than untreated cells. Increases in cell size were quantified using the MetaXpress Software (Figure 3) and resulted in a similar EC50 value to that for BNP detection.

Hypertrophy and heart failure are common therapeutic areas of drug discovery. The high throughput capabilities of the ImageXpress Micro System combined with human stem cell-derived tissue cells provide a complete system for accessing human biology early in the drug discovery screening process. As a proof of concept, cardiomyocytes were treated with a 10-point dose of each inhibitor in quadruplicate, followed by stimulation with a 1 nM concentration of ET-1. Five of the compounds demonstrating inhibitory activity are Verapamil (a calcium channel blocker), BEZ-235 (a dual P13K-mTOR inhibitor), cyclosporin A (a calcineurin inhibitor/immunosuppressant), fenofibrate (hypolipidemic agent), and SAHA (a broadspectrum histone deacetylase inhibitor)2 (Figure 4). 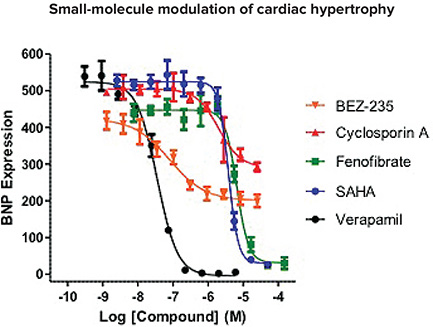 Figure 4. Representative data were plotted from multiple compound profiling experiments. iCell Cardiomyocytes were treated on day 4 of culture with a dilution series of compound for 1 hour prior to induction of hypertrophy with ET-1 (1 nM) for 18 hours in a 384-well format. Changes in BNP expression were quantified against titrations of compounds. Verapamil (black circles) was the most potent inhibitor with an IC50 value of 35 nM 2.

Human iPSC-derived cardiomyocytes provide an in vitro cellular system for modeling cardiac hypertrophy. Using high-content screening to monitor these drug-induced cardiomyocytes enables measurement of hypertrophy as a side effect of treatment as well as allowing creation of a model system for testing antihypertrophic compounds. Multiple parameters such as BNP expression levels and changes in cell size can be obtained in a single assay, allowing observation of even subtle indicators of a hypertrophic response. In addition, the 96- and 384-well assay formats combined with automated imaging and analysis, utilizing the ImageXpress Micro High Content Screening System and the MetaXpress Software Multi-Wavelength Cell Scoring Module, facilitate phenotypic screening in microplates for both disease-modeling studies and pharmacological testing.