Protein G, purified from the cell wall of Group G Streptococci, is a 30,000-35,000 Dalton protein which binds to the Fc region of antibodies1 . This characteristic is utilized for the purification of antibodies3 . Chromatography media or membrane containing covalently bound Protein G captures antibodies from solution while other components pass through the column or membrane. The bound antibodies are then eluted by decreasing the pH. Antibodies purified in this manner, and intended for pharmaceutical use, must be tested for Protein G that may have leached from these media.

This application note provides preliminary performance of a Protein G contaminant assay using a commercially available antibody. Chicken anti-Protein G antibody was chosen because Protein G binds very weakly or not at all2,3 to its Fc region. This note is intended as a guide and does not represent a validation of this assay, nor necessarily the optimal performance parameters.

The recombinant form of Protein G, which does not include the binding site for albumin, was used as the standard for the following data unless otherwise noted. All samples, standards, and labeled antibodies were diluted in ILA Assay Buffer.

The chicken anti-Protein G antibody was labeled as described in the ILA section of the Threshold System Operator's Manual, and in the ILA application note Optimizing the labeling of proteins. The chicken anti-Protein G antibody was dialyzed overnight at 4°C against PBS to remove sodium azide prior to labeling. Aliquots of the antibody were incubated with either biotin DNP-NHS or fluorescein-NHS at a 20:1 molar coupling ratio (MCR) for 2 hours at room temperature, in the dark. The MCR is defined as the moles of biotin label or fluorescein label (hapten) per mole of protein used in the labeling reaction.

The unreacted label was separated from the antibody by passing the reaction solution over a Pharmacia PD-10 column which had been equilibrated with 25 mL of PBS. The protein concentration and molar incorporation ratio (MIR) were calculated as described in the ILA section of the Threshold System Operator's Manual. The MIR is defined as the average number of moles of label covalently bound per mole of protein. The labeled antibodies were diluted to 10 μg/mL in ILA Assay Buffer and 250 μL aliquots were stored at -20°C. Antibodies labeled at 1.3 mg/mL had MIR's of 5.4 for biotinylated chicken anti-Protein G and 5.2 for fluoresceinated chicken anti-Protein G. Some variation in the background rates (μV/sec) has been observed for different labelings with the chicken anti-Protein G antibody; however, sensitivity and dynamic range remained consistent.

Determining the optimal concentrations of antibodies per test (loading study)

The lowest calibrator of the standard curve was selected by calculating the concentration of recombinant Protein G that would produce a 30–50 μV/sec increase over the background rate. The calculation was made using the slopes observed in the loading study. The other calibrators were distributed evenly over the acceptable range of the assay, 25 pg/mL to 5000 pg/mL (Figure 1 shows a standard curve using Protein G concentrations of 5000, 2500, 1250, 625, 156, 50, 25 and 0 pg/mL). A quadratic equation best defined the standard curve. 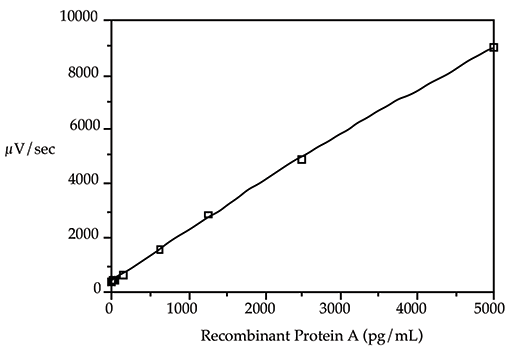 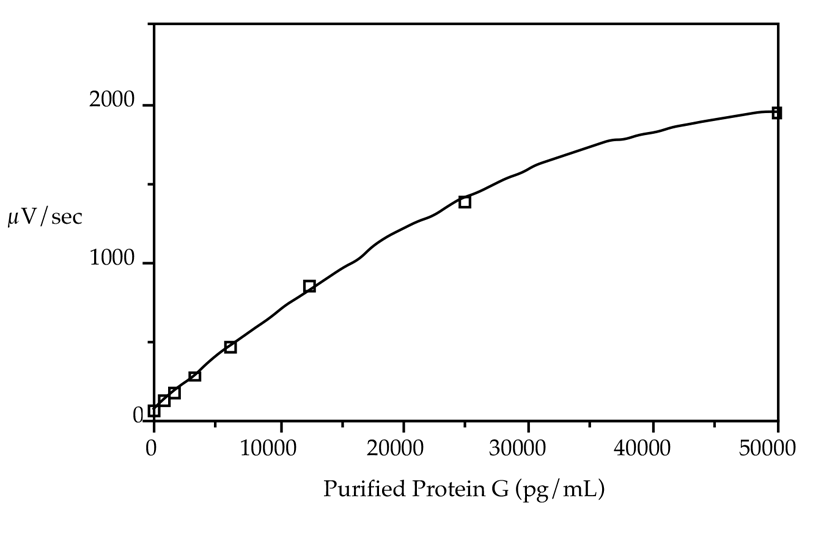 A kinetic study was performed to determine optimum incubation time. Four levels of analyte (0 pg/mL, 200 pg/mL, 1000 pg/mL, 3500 pg/mL) were incubated with labeled antibody for 30 minutes, 1 hour, 2 hours and 4 hours. The standard curve and * (0 pg/mL) and # (1250 pg/mL) samples for all sticks were incubated for 4 hours. The reaction had not reached equilibrium at 4 hours (Figure 3). A 2 hour incubation time was chosen for the experiments in the remainder of this application note for convenience and because sufficient dynamic range was obtained. If the incubation time selected differs from that used originally to characterize the standard curve, then the standard curve range may need to be redefined using the new incubation time. See the Threshold System Operator's Manual for information on evaluating the limit of detection. This specific assay allows detection of 25 pg/mL Protein G with a four standard deviation separation from the background.

Recovery of a 1 ng/mL spike of recombinant Protein G was tested in the presence of a range of concentrations of different species and subclasses of antibodies. A buffer control was included in each experiment. Percent spike recovery was calculated as follows:

Table 1: Spike recovery in the presence of product antibody.

Limit of detection in the presence of product antibody

The limit of detection in the presence of the antibodies tested above was determined in two independent experiments, using the antibody concentrations listed in Table 1. The detection limit is expressed as parts per million (ppm), mass of Protein G/mass of antibody (Table 2).

Table 2: Limit of detection in the presence of product antibody. *Results from a single experiment

The data in this application note were generated using a 2 hour incubation time and 50 ng/test of each labeled antibody. These conditions yield a sensitive (1 to 10 ppm), quantitative assay with a wide dynamic range for measuring contaminant Protein G. The assay conditions can be modified to meet various assay requirements. For example, greater sensitivity may be achieved using a longer incubation, or a rapid (but less sensitive) assay may be developed using a shorter incubation time. The limit of detection levels determined for the various product antibodies tested may not be representative of all antibodies. Validation of assay performance, particularly the limit of detection, should be determined for each product antibody tested.