Genome editing has been widely used to study gene expression and protein function, but many of these methods are labor intensive and inaccurate1 . The CRISPR (Clustered Regularly Interspaced Short Palindromic Repeats)/Cas9 system has become a very popular tool for editing genes due to its high accuracy and ease of use2. It originated as part of the innate immune system of bacteria and archaea and was used to protect against foreign DNA3,4. Short sequences of known foreign DNA are expressed as CRISPR targeting RNA (crRNA), which guide the Cas9 enzyme to cleave any foreign DNA containing a similar sequence. By harnessing this system, researchers can study the effects of gene silencing and transcription regulation, and they can potentially alleviate genetic disorders in diseased cells5.

A guide RNA (gRNA) similar to a crRNA is designed to target a region in the gene, and the Cas9 enzyme can create doublestrand breaks in this specific region of the host cell’s genome (Figure 1). After a double-strand break is made, the cell will undergo one of two repair pathways: the nonhomologous end joining (NHEJ) pathway or the homology-directed recombination (HDR) pathway. The NHEJ pathway is commonly used to disrupt genes via base insertions or deletions (indels), while the HDR pathway can be used to knock in a reporter gene or an edited sequence by exchanging sequences between two similar or identical molecules of DNA6. 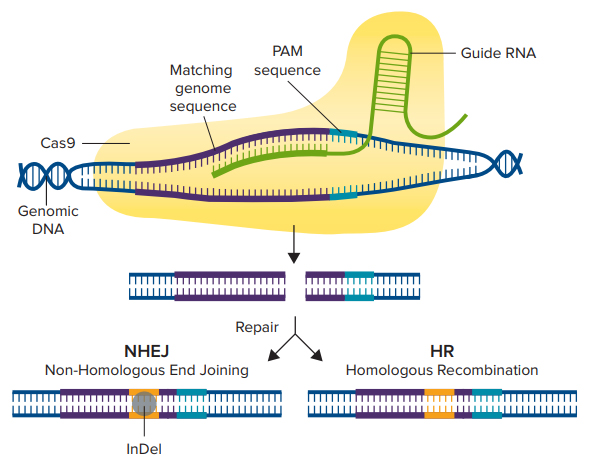 Figure 1. CRISPR/Cas9 Mechanism. The Cas9 enzyme is activated by first binding to a guide RNA, then binding to the matching genomic sequence that immediately precedes 3-nucleotide PAM sequence. The Cas9 enzyme then creates a double-strand break, and either the NHEJ or the HDR pathway is used to repair the DNA, resulting in an edited gene sequence.

Validation of gene editing is necessary to determine if the introduced mutation knocked down the gene of interest. Usually, genomic PCR and genetic sequencing tests are performed to confirm successful deletions or insertions, however, measuring protein expression is a more definitive measure of gene knockdown, avoiding signal from in-frame deletions/mutations7 .

HEK293 cells were seeded in Costar tissue culture-treated 6-well plates at 300,000 cells per well. Cells were transfected with (1) a guide vector (AAGATGTGCTTCGAGATGTG) and (2) a donor vector containing sequences for puromycin resistance and GFP. In parallel, three wells of cells were transfected with the pCas-Guide-EF1a-GFP vector that transiently expresses GFP as a transfection control. 6 µL of FUGENE HD transfection reagent and 2 µg of total DNA (3:1 ratio) were used to transfect cells. Afterwards, cells were incubated at 37°C overnight. Transfected cells expressed GFP and were identified and counted in the green fluorescence channel of the MiniMax cytometer. Total cell count was calculated using StainFree analysis, and transfection efficiency was measured by dividing the number of GFP-positive cells by the total number of cells using SoftMax Pro Software.

Figure 2. CRISPR/Cas9 experimental workflow. HEK293 cells were transfected with the guide and donor vectors. Cells are then selected with 1.0 µg/mL puromycin to enrich for cells with gene insertion. DNA and protein are collected from the selected cells, and genomic PCR and western blotting are performed to verify gene insertion and knockdown, respectively.

5 µg and 10 µg of total protein from both CRISPR-edited cells and unedited cells were prepared by diluting cell lysates in Laemmli sample buffer and boiling at 100°C for 10 minutes. Samples were then loaded onto a 4-20% pre-cast gel, and SDSPAGE was performed. Proteins were then transferred to a PVDF membrane using the Trans-Blot Turbo system’s semi-dry method.

The membrane was incubated in ScanLater Blocking Buffer at room temperature for one hour. The loading control, ladder, and ATG5 region lanes of the membrane were then cut into separate pieces and incubated in their respective primary antibodies (see Table 1) at 4°C overnight. Following three washes in ScanLater Wash Buffer, the blot pieces were then incubated with ScanLater Eu-labeled secondary antibodies at room temperature for one hour. The antibodies and their dilutions are shown in Table 1.

Data were exported from SoftMax Pro Software into ImageJ software, and band densities were measured to quantitate relative ATG5 protein expression. Vinculin, a 117-kDa cytoskeletal protein associated with cell-cell and cell-matrix junctions, was used as a loading control to normalize for sample loading variation.

The MiniMax cytometer captured high quality images of both transfected and non-transfected cells, and SoftMax Pro Software was able to identify and quantitate the number of GFP-positive cells and total number of cells. A 13% transfection efficiency was calculated (Figure 3). 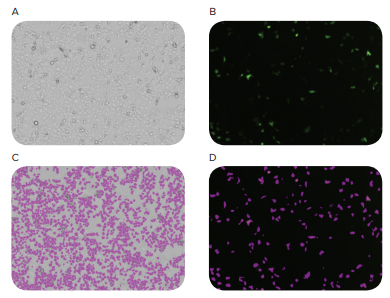 Figure 3. Images of cellular transfection. HEK293 cells were transfected with a pCas-Guide-EF1a-GFP vector in parallel with CRISPR/Cas9-transfected cells to calculate transfection efficiency. The MiniMax cytometer was used to image cells in the bright-field channel (A) and the green fluorescence channel (B). SoftMax Pro Software identified and counted cells in both channels (C and D), and a 13% transfection efficiency was calculated by dividing GFP-positive cells by total cell count.

PCR analysis of genomic DNA samples determined that the correct-sized insertion had been made in the ATG5 region of the HEK293 cell genome (data not shown).

Figure 4. ATG5 western blot experiment. ATG5 protein expression was visibly lower in CRISPRedited cells compared to unedited cells. 5 µg and 10 µg of sample were loaded onto the SDS-PAGE gel to account for over/under sample loading. Vinculin was used as a loading control to normalize for variable sample loading. The western blot image was exported to ImageJ software to measure band density. 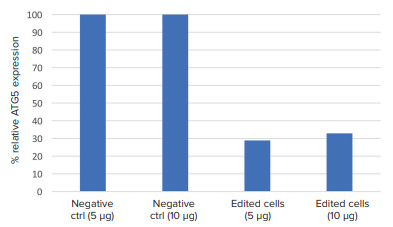